A service of Nine Lessons and Carols will be held via Zoom at 5:00pm today. Click on the link at the left of St Dyfnog's home page to join us - all welcome! OURSELVES YOUR SERVANTS FOR JESUS’S SAKE

A Pastoral Letter for the Teulu Asaph from Bishop Gregory : July 15th 2021

I have written elsewhere about the impact that the ordinations at Petertide always have on me.  We claim the lives and service of another generation of individuals to become dedicated witnesses to Christ in the ordained ministry, a ministry of Word and Sacrament.  It is strange then to see our sister Church over the border become embroiled in controversy in this season.  Apparently, the Head of Church Planting for the Church of England set a target for 10,000 lay led new churches at an online conference supported by many of us in the diocese in recent weeks, but sparked off controversy not because of the ambitious number he set, but because he described these churches as being without the limiting factors of “a building and a stipend and long, costly, college-based training for every leader of the church”.

He’s got a point – the earliest Church met not in specially constructed buildings, but in people’s homes.  There were no stipendiary ministers (even the apostle Paul grumbles in his letters from time to time about having to make his own living), no discernment panels and no theological colleges.  Yet God gave the growth.  I sometimes feel we could learn a great deal from being bold like the early Church, and seed groups meeting in homes right across the diocese, who would come together to read the Bible, pray, and support one another’s faith.  When we were baptised, we were all made partakers in the great royal priesthood of Christ, and sanctified as witnesses to new life in him.  It can be done, let’s get on with it …

So why did we bother with all the palaver of the ordinations in the Cathedral in these last few weeks – putting people through two or three years of training and formation, ordaining them not once but twice, a year apart, and asking them to serve curacies?

Being a Church among the family of the Churches of the Anglican Communion, the Church in Wales believes that God speaks to us not just in Scripture (although the Bible takes first place as our authority, as it is God’s Word), but also through Reason (our God-given ability to think) and through the lived wisdom and experience of Christians for twenty centuries, known by the shorthand term “Tradition”.  We believe that all three are given by God to enrich and support our faith, and that the way that the Church has evolved over those centuries was led by the Holy Spirit to give a robustness to the Church, and a royal road to holiness and to Christian victory.  The Holy Spirit didn’t quit with the death of the apostles, or the authorship of Scripture.

Of course a lay-led community of believers meeting in 83, Acacia Avenue can flourish and grow disciples deep rooted in Christ.  We could do with more of them.  However, Anglicans also believe that if such groups are to be sustained and nurtured and formed into an enduring worshipping and witnessing communities, then they also need to be fortified by deeply rooted understandings born of sustained study of the Bible, and the nourishment of the Sacraments instituted by Christ, so that we recognise that a sacred priesthood, configured to the High Priesthood of Christ, and gathered around the bishop, is among the gifts of God to his Church. “For what we proclaim is not ourselves, but Jesus Christ as Lord, with ourselves as your servants for Jesus’ sake.” (2 Corinthians 4.5), and, as the motto of the Scottish Episcopal Church asserts, “Evangelical Truth AND Apostolic Order”.

Eternal God, our heavenly Father, we bless your holy name for all that you have given us in and through the life of Philip, Duke of Edinburgh. We give you thanks: for his long and full life; for his strength of character; and for his devotion and service to family, nation and Commonwealth. We praise you for: his generosity; the many contributions he made to our national life; and the encouragement he gave to so many, especially to the young. Accept our thanks and praise, we pray, through Jesus Christ our Lord. Amen.

Merciful God, be close to all who mourn, especially The Queen and all members of the Royal Family. May they know the comfort of your love, through Jesus Christ our Lord. Amen.

Eternal God, we give thanks for the life of Prince Philip, founder of the Duke of Edinburgh’s Award. We remember his vision and imagination, his interest in young people and his support for them. Inspire us with the same commitment to serve friend, neighbour, and stranger alike, through Jesus Christ our Lord. Amen.

Near the entrance of Esgobty [Bishop’s house] there is the most magnificent Magnolia tree.  Around this time of year it is particularly exciting as the green buds begin to blossom and the white flowers begin to peep through. In a few weeks’ time the whole tree will be covered in white blossom, beautiful and startling.  Then the flowers will drop away and we’ll be waiting for next year.

That reliable sign of new life every Spring is for me a sign of the reliability of the love of God in creation. More than this, every Spring we remember the resurrection of Jesus Christ:  he who was crucified yet who, in Christian faith, rose again, conquering the powers of sadness and of death.

That theme of new life is particularly important for us this year.  This time last year we were just entering into lockdown. We had no idea that a year later we would still be faced with the challenges of Coronavirus.

In this last year a lot will have changed. People have died.  People have struggled. The whole of society has had to work very hard, cooperating in order to bring us through the crisis. 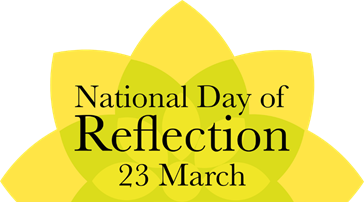 A National Day of Reflection will be held on Tuesday 23rd March 2021, the anniversary of the first lockdown. in memory of those who have died and all who are still suffering.

Let us reflect on the pandemic, support all who have suffered and face the future with hope.

Please observe the silence in your own home.  You are invited to light a candle or plant a flower and say a prayer to remember those who have suffered, those who have died and all who are grieving and in despair.

Prayers on the National Day of Reflection

Loving God,
You hold all our times in your hands, our past, our present, our future. Be close to us now as we remember all the difficulties and disappointments of the past year. Be especially close to all of us who are thinking of someone we loved and knew, but see no longer, whether family, friend, colleague or neighbour. Help us to trust that they are at peace with you, and comfort us with your presence.

Loving God,
You place us in families and communities, and we give you thanks for all those around us who serve us and help us in so many ways. Give wisdom to community leaders, to our schools, hospitals, care homes and other agencies who make a difference to our lives. Help each of us to have the courage to reach out with thanks and kindness to those around us and to speak words of faith as we share the good news of your love.

Loving God,
As we journey towards Easter, help us to live as people of hope, knowing that beyond the pain of the cross lies the joy of resurrection. Be with those who are struggling in mind, body or spirit, and give courage to those who are facing uncertainty and change ahead. Help each of us to keep our eyes fixed on you, that we may reflect your light to all whom we meet.

The fourth Sunday of Lent is always Mothering Sunday or Refreshment Sunday. A day of respite from the disciplines of Lent.  It is a day for celebrating all Mothers and giving thanks for their love.  Mothering Sunday has been around for a very long time, hundreds of years ago it was a day for honouring the Mother Church and people went to a special service at The Mother Church, which for our diocese is St Asaph Cathedral, or they returned to the Church where they had been baptised.  The idea of giving flowers on Mothering Sunday comes from the tradition of bringing flowers to decorate the Mother Church. Those returning to their church on this day would gather the flowers on the way. The flowers would be displayed in the church, blessed and then distributed amongst the congregation.   In later times Mothering Sunday became a day for young people who were away from home working as servants to have a day off and go home and visit their mother, often taking a gift of simnel cake.

The story of the baby hidden in the bulrushes by his mother, protected by his sister and then discovered by a real Princess is a story much loved by us all.  It appears to be a story with a happy ending and yet it has far reaching consequences that form part of God’s plan.  It is a story of defying those who tried to destroy God’s people.  We have to remember the soldiers were looking for all new-born baby boys in order to kill them, how terrifying that must have been for every new Mother. . As they searched day after day every tiny sound that Moses made would have caused his mother’s heart to miss a beat as she sought to keep him hidden, yet she risked everything in order to save her son.  It is a story of a brave mother’s love.  There was such love within her that it caused her to take great risks in order that her son may live.  We know that Moses went on to become one the Patriarchs of the Jewish faith but his mother knew nothing of God’s plan, she simply did what she did out of love.

To love and nurture our children is a great gift.  Anyone who has welcomed a tiny baby into the family, a child, grandchild, niece or nephew will know the joy that they bring.  All babies are a beautiful witness to God’s creating love, but in the midst of it all there is still the hard work, the worry, the sacrifices, yet so willingly given for love of a child.  There is a quote that says ‘the joy of Motherhood is when all the children are finally asleep in bed.’

Whether you are a Mother, Grandmother, Godmother or someone who shares in the care of children, Happy Mother's Day.

A prayer for Mothering Sunday

Loving God, your son Jesus was born into the earthly family of Mary and Joseph: bless all parents and all who care for children.  Help us to show your love in our homes that they may be places of love, security and truth.  Amen